When I was in high school I had a few nicknames. Dently was my most popular one. Milkman was probably the funniest one. The most hurtful one, was WWL, which was based on the girls I dated.  WWL stood for white woman lover and it was based on the relationship I had with MT.  She was the one person, who truly understood what I went through as a kid in a predominately white school and just accepted me for being Keith.

I never could fully understand why people felt the need to call me this.  What did my classmates expect. I went to a predominately white school. You can’t help who you fall in love with in high-school. At that time, you were just glad to have someone from the opposite sex to talk on the phone, or go to the movies.

As I graduated high school, our relationship ended not based on the fact that we weren’t compatible, but at that time the possibility of maintaining the relationship until marriage wasn’t even considered with the acceptance of interracial marriages at about 40% for whites and about 70% for African-Americans. I knew the type of pain and scrutiny I felt in high-school, who wanted to continue that into adulthood.

Americans’ attitudes about interracial marriage have changed dramatically over the past 50 years, moving from the point in the late 1950s when disapproval was well over 90%, to the point today when approval is approaching 90%. Census data indicate that black-white marriages in reality remain fairly rare — although they have increased from 167,000 in 1980 to 558,000 in 2010, they still represent less than 1% of all married couples. The major shift in attitudes about such unions, however, is a telling indicator of the general shift in views of racial matters on many fronts in the U.S. over the last five decades

These data are from Gallup’s Minority Rights and Relations poll, conducted June 13-July 5. The poll surveyed 4,373 Americans, including 1,010 non-Hispanic blacks.

Approval of marriages between blacks and whites is up one percentage point from 2011, when this attitude was last measured. Approval has generally increased in a linear fashion from Gallup’s first measure in 1958, reaching the majority threshold in 1997, and crossing the three-quarters line in 2004. Eleven percent of Americans today say they disapprove of black-white marriage, compared with 94% who disapproved in 1958.

Blacks’ approval of black-white marriage (96%) is now nearly universal, while whites’ approval is 12 percentage points lower, at 84%. Blacks’ approval has consistently been higher than whites’ over the decades, although attitudes among both racial groups have generally moved in a parallel manner since 1968 — when Gallup first was able to report reliable estimates of each group’s opinion. The gap between black approval and white approval in recent years has been smaller than it was prior to 1997. 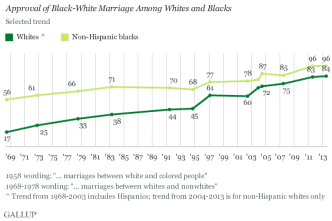 Like all married couples, you face challenges in maintaining happy and healthy relationship. It can be an ever bigger strain if you have to face challenges that have nothing to do with your marriage at all, but based the fact that you have different skin color. The best way to protect your marriage is to create an environment where open communication and establishing a strong family mission statement t with your partner will help you to overcome any obstacles you face. Here are five tips to strengthen your marriage.

I a great day to know that I can finally put WWL to rest.

Strivers!  How have your views changed in regards to interracial marriages? If you are single would you consider dating someone of another race?

Keith has over a decade of experience in the field, counseling and coaching individuals, couples, teens and their parents to help them improve their relationships and their ability to achieve their personal goals. For the past seven years Keith has developed specific programs to help teens and their families achieve success in all facets of their lives that may have eluded them in the past. Academics, relationships, athletics, college preparation and applications, goal setting and developing specific plans are areas where working with Keith as a Coach can help young people set the patterns that promise a brilliant future. He works with couples to help them achieve the kind of relationship they envisioned when they first made their commitment to each other. Strengthening communication and revitalizing their understanding and empathy for each other helps couples regain the romance and closeness they long for – even in their everyday “real” world. Having a coach is like having a GPS for life. Keith can help you get a realistic picture of where you are and focus on the best path forward toward your goals. Unlike counseling, coaching focuses on the future, not the past. View all posts by ilovestrong

This site uses Akismet to reduce spam. Learn how your comment data is processed.